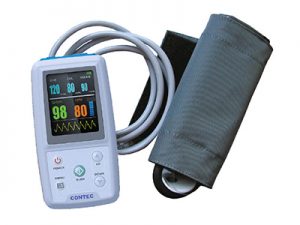 Ambulatory BPM devices are worn by patients throughout the day during a full 24 hour period. By tracking the ups and downs of blood pressure throughout such a long day, physicians are able to see how effective certain medications are upon consumption, as well as the blood pressure at other times such as late at night.

The device is fitted and begins taking regularly scheduled readings throughout the testing period — usually every 30 minutes during the daytime, and hourly at bedtime. The device will beep at regular intervals to signal that it will begin to take a blood pressure reading. At this time, the user should:

The user will also be asked to keep a diary of what they were doing throughout the day, near the blood pressure sampling times, if they felt uncomfortable at anytime, and to comment on when they took different doses of medications.

The device is small enough to be worn on the waist, while the cuff remains attached to the upper arm.

During bedtime, the device can be kept under a pillow or alongside the patient. During daytime, the machine should only be removed during showers or baths.

At the conclusion of the 24 hour period, the blood pressure data will be downloaded and interpreted.